Citizen Artists: World War I and the Creative Economy Symposium

Saturday March 11, 9am – 5pm
Sunday March 12, 10am – 1pm
$50 for PAFA members. $75 general admission
Registration includes a Saturday evening reception with cash bar and hor d’oeuvres. Choice of tour can be made during the registration process.

In partnership with the Pennsylvania Academy of the Fine Arts

This two-day symposium examines the creative contributions of American artists and citizens before, during and after World War I. Conversations will consider the relationship between military conflict and visual culture, the deployment of everyday citizens in the pursuit of national agendas through art and art-making, evolving racial and gender roles, and the interminglings of memory and mythology in understanding our own history. Tours with local cultural partners will expand the conversation into other disciplines through the examination of special World War I related collections around the city in smaller groups. Interested attendees will have the opportunity to visit the Library Company and participate in a curator-led tour of the Together We Win exhibition from 4 to 5pm on Saturday.

Library Company members are invited to a special tour of the Pennsylvania Academy of the Fine Arts’ groundbreaking exhibition which explores the ways in which American artists reacted to the First World War. Seventeen posters from the Library Company’s collection will be on display in the exhibition.

Library Company of Philadelphia members enjoyed a special exhibition preview reception for Together We Win: The Philadelphia Homefront During the First World War at our 285th Annual Dinner on November 10, 2016. During the reception, Philadelphia Voices of Pride, who also collaborated with the Library Company on programming for our That’s So Gay exhibition performed a small selection of songs from our World War I sheet music collection. Attendees enjoyed hearing early-20th century hits such as I’m Going to Follow the Boys and If He Can Fight Like He Can Love, Good Night, Germany! 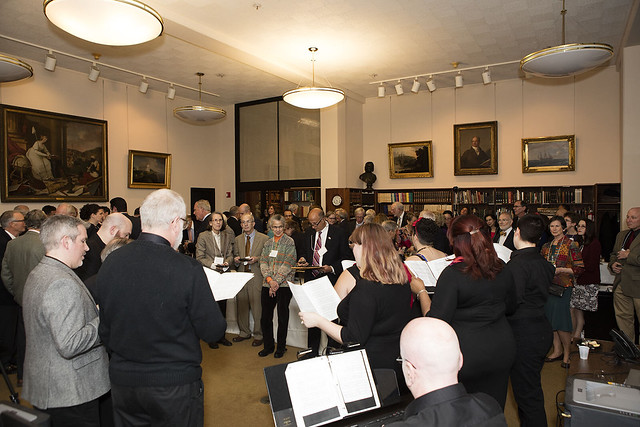 PAFA Performances: The Music of World War I

Public radio host and Peabody Award winner Michael Lasser, who has been talking about popular music as social history for over thirty-five years, turns his expertise to the time of World War I, when songs like the military-themed anthem “Over There” reflected the imaginations of a country newly at war. Accompanied by live performances of some of the most notable songs from the period, his approach is richly musical, anecdotal, insightful, often amusing, and just as often emotional.

The Library Company of Philadelphia

Our first Library Company book club! Together We Win exhibition curators lead the discussion on Pat Barker’s Regeneration. In 1917, the decorated war hero, Siegfried Sasson, publicly refused to continue fighting in World War I. Classified as “mentally unsound,” Sasson was sent to a war hospital to regain his “sanity.” This work of historical fiction explores the psychological effects of World War I and medical and mental health treatments during the era. We invite you to bring your lunch and spend an hour with us examining this powerful book.